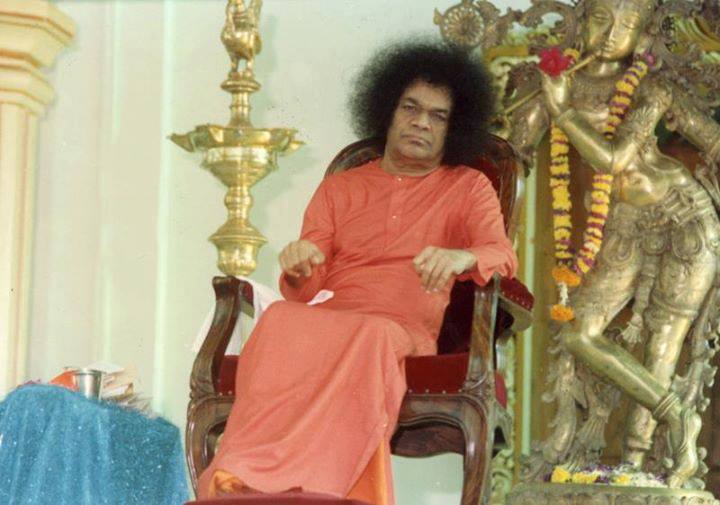 Embodiments of Love!
We should not regard the Bhagavad Gita as merely a dialogue between Krishna and Arjuna. It is an endless dialogue between the human and the Divine in the hearts of all human beings. Just as Arjuna listened to Krishna’s Voice with an unwavering mind, every human being must listen to the words and declarations springing from the depths of his heart in a spirit of sincerity. If this spirit of attention is improved, it is possible for man to reach Godhead. A danava (demon) can undoubtedly become a manava or man and man can become God, through such discipline. This is the unexcelled glory of the Gita. The influence and the sanctity of the Gita can be understood not by the ordinary human consciousness but by the Divine levels of man’s being.

Gita is a kalpatharu or wish-fulfilling tree, which was planted by Krishna and nourished by Vyasa. The Upanishads are the seeds of the tree. Knowledge of Brahman is the sprout. The Sastras are the branches and Love of Easwara and surrender are the fragrant flowers. The Bliss of the Atma is its fruit. Every human being must take shelter under this tree and seek to attain fulfilment of the purpose of life—Infinite Beatitude.

The advent of an Avatar and His actions provide inspiring ideals for the emergence of divine human beings. We should endeavour to bring about Avatharana or “descent” of the Divine principle in our hearts. This is the most sacred yoga, described as jnana yoga. Jnana yoga serves as the royal road leading man to his sublime goal.

“As you are my devotee and friend,” Krishna addressed Arjuna, “you deserve to receive the gift of this wisdom, which I am imparting to you out of affection.” In this context, we must pay attention to the two epithets, “devotee” and “friend”. There is no higher state than that of a devotee; why then did Krishna use the epithet “friend”? If we consider the status of a friend as the highest, why should Krishna have employed the epithet “devotee”?

Humility and obedience are the qualities of a devotee. Excessive humility that often goes with devotion might act as a barrier in forging the spirit of intimacy with God which is so vital for attaining Atma Jnana or Supreme Wisdom. On the other hand, close friendship and excessive familiarity alone might make a person take undue liberties. For these reasons, Krishna referred to Arjuna as both “devotee” and “friend” or one in whom friendship is enriched by humility and devotion is tempered by intimacy. As Arjuna was both a devotee as well as a friend of the Lord, he was the most deserving recipient of the Bhagavad Gita.

“You deserve to be initiated into this yoga, O Arjuna,” said Krishna. “At first, I taught it to the Sun who taught it to Manu, who in turn enlightened Ikshvaku. In this manner, through the experiences of the sages, all kings came to know about it, Arjuna! This wisdom is eclipsed today and therefore, through you, I desire to communicate this yoga to the world again.”

These words of Krishna’s bewildered Arjuna. He asked, “Krishna, you are my contemporary; how and where could you get the opportunity to teach this yoga to the Sun who taught it to Manu of yore? I am unable to believe this. Please clarify my doubts.”

At the time of the war, Arjuna was eighty-four years old and Krishna was eighty-six, the difference in their ages being only two years. Then how was it possible during those two years for Krishna to have taught the Gita to the Sun, Arjuna queried. Krishna smiled and replied, “Arjuna, I am unborn; I am infinite; I am omniscient and omnipresent. I have neither beginning nor end. You, too, are above birth and death, and have taken several bodies. There may be birth and death for the body, but you are above them. Because of your external vision, you are ignoring this aspect. If you turn your attention to the Atmic Reality, you will be able to recognise your immortal nature.”

Whenever injustice and unrighteousness raise their hoods in the world, the Lord comes down as an Avatar. The word Avatar means descent. It is not coming down from the peak of a mountain or the top storey of a building. It is a descent from the state of the Atma to the state of the body. A little illustration clarifies this point. An ICS officer may be well-versed in many branches of learning. But when he teaches his little son, he begins to write upon the slate the letters A, B, C, D and the boy learns them. Why should such a highly educated ICS officer come down to the level of teaching the alphabet? It is for the sake of teaching his ignorant son that the officer is forced to descend to the boy’s level. It does not mean that the officer knows only the letters of the alphabet.

Similarly, when a child cries, its mother bends low and picks it up. The child crying on the floor cannot reach up to the arms of the mother. If the mother thinks it an act of condescension to bend, then she will not undertake to pick up the child. By bending out of love for the child, the mother does not lower her own status.

In the same manner, out of His love and affection for mankind, the Lord descends to the human level in order to elevate men to Godhood. Such a descent does not in any way diminish Divinity.

For one who desires to attain the divine heights of the Supreme Being, karma and wisdom are like the two wings of a bird. Many jnanis put a stop to their actions thinking that they have reached the highest state. In the state of nirvikalpa samadhi, it is not possible to do anything. This may be described as the natural state of vairagya (detachment). But some people feel proud of their wisdom and discard all activity. This kind of vairagya proceeds from sloth, thamas, and is the result of vanity. This pseudo-detachment, born out of indolence, can never be traced to wisdom.

“In fact, the wise never desist from action, in order to be a model for others. If the wise do not act, there will be none to guide the ignorant”, Krishna observed.

It is not desirable to give undue prominence to work, too. Wisdom is the final reward for the blossoming of our mind through action. If we go on harping on duality, when can we achieve peace? From duality, we must progress to qualified non-duality and finally to complete non-duality. Wisdom cannot be derived by mere acquaintance with many books. It cannot be acquired by learning the Sastras and philosophy. Real wisdom lies in the vision of non-duality. (Adwaitha darsanam jnanam). The elders say that real wisdom lies in the recognition of Divinity everywhere.

Stuffing the brain with bookish knowledge does not lead to the purification of the mind. Wisdom does not mean mere prattle. It must be put into practice and authenticated by our actions. Real wisdom should be reflected in the joy with which we work. Can all the green birds speak like parrots? Can all the worms crawling on flowers hum like bees? Can the ass wearing tiger’s skin ever become a tiger? Can a swine, grown to elephantine proportions, ever become an elephant? Though the he-buffalo has two horns, can they ever have the value of the tusks of an elephant? In the same manner, those who memorise the Sastras, the Upanishads, the Vedas, the Ithihasas, and the Puranas, those propagating them without practice, can never be regarded as wise persons.

Krishna told Arjuna, “I am present behind all phenomena. I am the spirit present in you as well as in all the soldiers who have gathered here for battle. When you regard yourself as distinct and different from Me, you can not properly understand the aspect of unity.”

A thief entered a house at night and stole many objects. The next morning he was arrested by the police. In the wakeful state, during the day, the thief denied his offence in order to defend himself and escape punishment. Though it was a lie told in self-defence during the wakeful state, the super consciousness within him continued to tell him that on the previous night he had entered a certain house, stole several objects and kept them at a certain place. This truth continued to haunt him.

In the same manner, though every human being may be guilty of concealing falsehood and sin, though many lies may be told for the sake of escaping worldly censure, deep down within him he is aware of the sins he has committed, the lies he has told and the harm he has caused to others. The area from which such inner promptings of truth generate is the abode of Krishna. So, in the heart of every man, there is a continuing dialogue, a perennial argument between the human and the divine.

I often say that you should not remain forever in the stage of idol worship. You may worship a picture as God, but not God as a picture. Carrying on your enquiry, you should strive to manifest the divinity latent in you and realise that the super consciousness in you is your real Master. You must follow that Master, face the Devil of the evil tendencies in you, fight them to the end and finish the game of life with success.

The education that students secure today is not true education; it is only a bread-winning formula. As Krishna said, spiritual education is the highest education. Just as all rivers flow into the ocean, their destination, all branches of learning—scientific, medical, cultural, religious—also coalesce into spiritual education, which is their goal. In this context, Thyagaraja said, “O, mind! Why are you worried to find so many different rivers in the ocean at Dhanushkoti? If we bathe in the ocean, we earn the merit of bathing in all the rivers.”

I hope that you will pursue the path of spiritual education and with pure hearts and selfless actions, work for the welfare of the world.