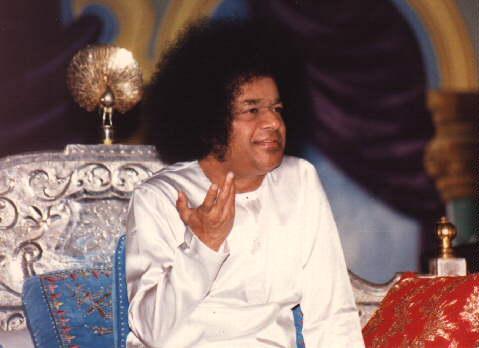 The process of living has the attainment of the Supreme as its purpose and meaning. By the Supreme is meant the Atma. All those who have grown up in the Bharathiya culture - the Bharathiyas - know that the Atma is everywhere. But, when asked how they have come to know of this, some assert that the Vedas have taught them so, some others quote the Sastra texts, and some others rely on the experiential testimony of the great sages. Each of them bases his conclusion and proves its correctness according to the sharpness of his intellect. Many great men have directed their intelligence towards the discovery of the omni-present Atma and succeeded in visualising that Divine Principle. In this country, Bharath, they have evidence of the successful realisation of the goals placed before themselves, by preachers, pundits, aspirants and ascetics, when they tried earnestly to pursue them. However, among millions of men, we can count only a few who have been able to visualise the Universal Atman.

No other living being has been endowed with intelligence and discriminative faculty, heightened to this degree, in order to enable it to visualise the Atma. This is the reason why man is acclaimed as the crown of creation, and why the Sastras proclaim that the chance of being born as man is a very rare piece of good fortune. Man has the qualifications needed to seek the cause of Creation; he has in him the urge and the capacity. He is utilising the Created Universe for promoting his peace, prosperity and safety; he is using the forces and things in Nature for promoting his happiness and pleasure. This is approved by the Vedas themselves.

The Vedas are the authority for the faith of millions. They are the very words of God. The Hindus believe that the Vedas had no beginning and will have no end. God speaks to man. They are not books written by authors. They are revelations conferred by God on many inquirers, of the ways of earning the Supreme Goal. They existed before they were revealed as valid paths; they will continue valid even if man forgets the path. They did not originate at any period of time nor can they be effaced at some other time. The Dharma which the Vedas allow us to glimpse is also without a beginning or an end. For, it refers to the Supreme Goal.

Of course, a few may argue that, though it may be conceded that the Dharma relating to the supreme goal has no ending, surely it must have had a beginning. The Vedas declare that the cycle of Creation - Dissolution has no point where it begins and no point where it ends. It is a continuous wheel. And, there is no change in the quantum of the Cosmic Energy - either increase or decrease; it is ever the same, ever established in Itself. The Created and the Creator are two parallel lines, with their beginnings unknown and their endings incomprehensible. They are moving at equal distances from each other, ever and ever. Though God is ever active, His Will and the Power behind it are not clear to the human intellect.

The Supreme, according to the Bharathiyas, (inheritors of Indian culture) is Vastness Itself. It rises to the high skies and roams free in that expanse. It was declared in clear terms, long prior to the historical period. The study of the concept of the Supreme and the propagation of this concept suffered serious setbacks in the course of history. But, it has confronted each of these with success and is today asserting itself alive and alert. This is proof of the innate strength of this revelation. The conceptions of the Supreme Goal as laid down in Judaism, Christianity and Zoroastrianism endeavored to subsume into their categories the Bharathiya concept and transfuse it as part of themselves; still, it did not accept an alien status in its own 'birth-place'; on the other hand, it clarified to those religions themselves their own concept of the Ultimate and emphasised the Unity of all view-points, and established cordiality on the basis of the absence of difference. While the stream of knowledge regarding the Supreme Goal discovered by the Bharathiya saints flowed on the concepts of the other faiths remained as pools beside it.

In India (Bharath) itself many sects were born like mushrooms from out of the main faith. They tried to pluck by the roots or to cause mortal damage to the basic concept of Hinduism regarding the Reality, the Supreme. But, as in a terrific quake of land the waters of the sea recede only to return with thousand-fold fury roaring back upon the shore it had seemed to quit, this stream of Bharathiya wisdom was restored to its pristine glory, when it rose above the confusions and conflicts of history. When the agitations subsided it attracted the varied sects that distracted the mind of man, and merged them into its expansive form. The Atma principle of the Bharathiyas is all embracing, all-revealing, all-explaining and all-powerful.

Developing faith in the Atma Principle and loving it earnestly - this is the real worship. The Atma is the one and only Loved One for man. Feel that it is more lovable than any object here or hereafter - that is the true adoration man can offer to God. This is what the Vedas teach. The Vedas do not teach the acceptance of a bundle of frightfully hard rules and restrictions; they do not hold before man a prison-house where man is shut in by the bars of cause and effect. They teach us that there is One who is the sovereign behind all these rules and restrictions. One who is the core of each object, each unit of energy, each particle or atom and One under whose orders alone the five elements - ether, air, fire, water and earth - do operate. Love Him, adore Him, worship Him - say the Vedas. This is the grand philosophy of Love as elaborated in the Vedas.

The supreme secret is that man must live in the world where he is born like the lotus leaf, which though born in water floats upon it without being affected or wetted by it. Of course, it is good to love and adore God with a view to gain some valuable fruit either here or hereafter; but, since there is no fruit or object more valuable than God or more worthwhile than God, the Vedas advise us to love God, with no touch of desire in our minds. Love, since you must love for love's sake; love God, since whatever He can give is less than He Himself; love Him alone, with no other wish or demand.

This is the Supreme Teaching of the Bharathiyas. Dharmaja, the eldest of the Pandava brothers, as depicted in the Mahabharatha, is the ideal of this type of Lover. When he lost to his enemies his vast empire which included all India and had perforce to live in caves among the Himalayan ranges, with his consort Droupadi, she asked him one day, "Lord! You are undoubtedly the topmost among those who follow unwaveringly the path of Dharma; yet, how is it that such a terrible calamity happened to you?" She was stricken with sorrow.

Dharmaja replied, "Droupadi! Do not grieve. Look at this Himalayan range. How magnificent! How glorious! How beautiful! How sublime! It is so splendid a phenomenon that I love it without limit. It will not grant me anything; but it is my nature to love the beautiful, the sublime. So, here too I am residing, with Love. The embodiment of this sublime beauty is God. This is the meaning and significance of the love for God."

"God is the only entity that is worth loving. This is the lesson that the agelong search of our Bharathiyas has revealed. This is the reason why I am loving Him. I shall not wish for any favour from Him. I shall not pray for any boon. Let him keep me where He loves to keep me. The highest reward for my love is His love, Droupadi! My love is not an article in the market". Dharmaja understood that Love is a Divine quality and has to be treated so. He taught Droupadi that Love is the spontaneous nature of those who are ever in the awareness of the Atma.

The Love which has the Atma as its basis is pure and sublime; but, since man is bound by various pseudo forms of love, he believes himself to be just a Jiva, isolated and individualised, and deprives himself of the fullness and vastness of Divine Love. Hence, man has to win the Grace of God; when he secures that Grace, the Jivi or the individual will be released from identification with body and can identify himself with the Atma. This consummation is referred to in the Vedas as 'Liberation from Bonds' (Bandhavicchedana), or 'Release' (Moksha). To battle against the tendency of body- identification, and to win the Grace of God as the only means of victory, spiritual exercises have been laid down, such as philosophical inquiry, besides sense-control (dama), and other disciplines of the six-fold Sadhana. The practice of these will ensure the purification of the consciousness; it will then become like a clean mirror that can reflect the object; so, the Atma will stand revealed clearly. For Jnanasiddhi (the attainment of the highest wisdom), Chitthasuddhi (the cleansing of the consciousness) is the Royal Path. For the pure in heart this is easy of achievement. This is the central truth of the Indian search for the ultimate Reality. This is the very vital breath of the teaching.

The Bharathiya approach is not to waste time in discussions and assertions of faith in dogmas. They do not delight in the sight of empty oyster shells thrown upon the beach. They seek to gain the pearls that lie in the depths of the sea; they would gladly dive into those depths and courageously seek for pearls. The Vedas show them the ideal to follow and the road which leads to the realisation. The ideal is the awareness of the supreme Truth that lies beyond the knowledge gained by the senses of man. The Vedas remind man that the non-physical Atma is in the physical 'him', that embodiment of Truth is the Supreme Atman, the Paramatman. That alone is real and permanent; the rest are all transitory, evanescent.

The Vedas took form only to demonstrate and emphasise the existence of God. The Hindu siddhapurushas (those who attained the highest goal of spiritual Sadhana) have all travelled along the Vedic path and carried on their investigations according to Vedic teachings. The Sastras contain authentic versions of their experiences and the bliss they won. In the Sastras, and in the Upanishads, they assert, "We had the awareness of the Atma". Hindus do not aim at confronting a dogma or a theory and scoring a victory over it; they aim at testing that dogma or theory in actual practice. Their goal is not mere empty faith; it is the Sthithi (the stage reached), the Siddhi (the wisdom won). The life-aim of the Bharathiyas is to reach fulfilment, through constant Sadhana, the fulfilment that comes from the awareness of one's Divinity. Mergence with the Divine is the attainment of fullness. This is the Supreme Victory for the Hindu, the Bharathiya.